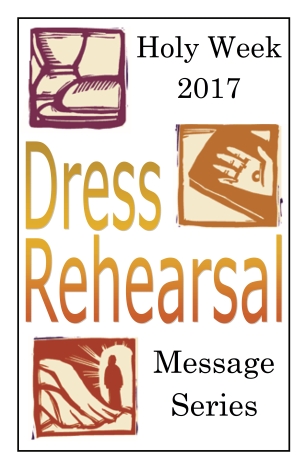 Homily for the Easter Vigil and Easter Day

I’ve been giving a “message series” this past week titled “Dress Rehearsal.” Like some movie sequels, be it the popular Harry Potter movies or the Fast and Furious series which apparently is on it’s eighth installment, sometimes it helps to understand what’s going on in the current movie if you know what’s taken place in the previous films. So let me very quickly summarize what the previous messages of this week’s series were about so that tonight’s/today’s message makes a bit more sense (Just in case you weren’t able to be at all the services.)

Last Sunday I compared this past week’s liturgies to a dress rehearsal of what the Christian life is to be like when we live as disciples of Jesus on the stage of the world. Palm Sunday was a sort of Disciples follow Jesus through his passion discovering the Paschal Mystery, that death can lead to fuller life here and now and eventually at the banquet of eternal life Mass gives us a glimpse of. Holy Thursday evening we learned what our role is in the drama of discipleship, that our role is to be servant; servants who die daily by letting go of their self-centeredness while taking care of the needs of others. Jesus, the lead actor taught us how to be servant when he washed feet and died on the cross to serve us life. Then, Good Friday was compared to Act 1 of a play. The first act of a play always sets up a conflict for the main character. The first act usually leaves the audience “hanging” at intermission wondering how the story will be “resolved” in Act 2. It might be a tragic ending or a happy ever after ending. Good Friday, Jesus is literally left hanging on the cross not sure if God is going to even open the curtain on a second act, or will his crucifixion be a tragedy with no happy ending.

But we’re here tonight/this morning because we do know there’s an Act 2. Otherwise, we might as well have [gone out and had a nice dinner]/[slept in!]  We’re here to celebrate the happy ending of the second act of the drama of Jesus’ life and death that gives us hope in the face of death. I know each of you, with me, wants to give thanks to God for writing in a plot twist into the story of Jesus’ death on the cross. Who would have expected such a turn of events? Surely not the soldiers keeping guard at the tomb, put there by those who were afraid that the followers of Jesus might pull a fast one. The women who went to the grave to pay their respects certainly didn’t expect a plot twist. Dead bodies stay dead as far as the  women knew. As the curtain rises on Act 2 the earth quakes as a way of saying God is shaking up the way the world works. God is destroying with mighty power the old order of creation and opening up a new future for humanity like a stone rolled back from the tomb of death humanity has found itself trapped in from that day in the Garden of Eden when men and women rejected the script God had written. A new day has dawned that will never see the darkness of death descend. What a plot twist, an unexpected turn of the story line! Death can not be avoided but death can be defeated. The drama reveals that actually any letting go of yourself trusting God’s script, including physical death, is the beginning of a new way of living, not the end of the story.

Yes, we live in a world where death in the form of disease rips loved ones out of our embrace. It is true the drama we’re part of sees death used as a weapon to control with fear or even destroy people who are viewed as an enemy. Terrorists rely on playing the part of death for they believe have no other way to advance their cause. Hunger kills off the forgotten starving people in draught covered lands. Yet, we know there is another way. We’ve met the living in Jesus in those who have sacrificed some of their life for us to have a better life. We’ve seen the truth of the Paschal Mystery when our life has been richer because we we’re selfless with our time, talent and income that benefited another person. The way of Jesus can heal the world of it’s death plague. He alone has fixed what has become a tragic play with his plot twist of dying and rising from the grave.

The world needs to see Jesus alive in us! When we sacrifice for others, when we selflessly make life better for our children, our spouse, the refugee, when we “put on the identity of Christ we were baptized and anointed in confirmation to have, then the living Christ will be encountered by others traveling the road of history. Then the plot twist can play out in time. We do not fear what ever comes out way as we walk the road of our lives because we know nothing, nothing, be it illness, violence or life circumstances will permanently take away or life. We’ll live because Jesus lives in us and we in him.

Now it’s time for us to perform Act 3. Like the women who were told to go and tell the other disciples, we write the script for Act 3 by our witness to Jesus. We bring this Good News of the resurrection plot twist into the world. The dress rehearsal of Holy Week is over. It’s time to perform on the stage of the world. It’s time to bring people hope in the face of death that attempts to hijack the story God has written for humanity. 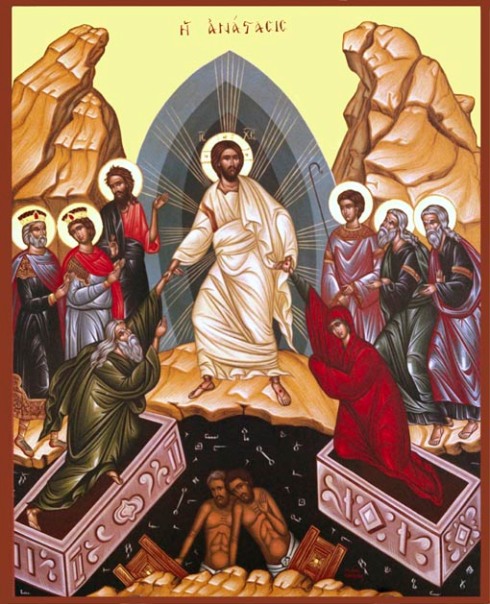