This Lent I am preaching a Message Series called “Root Cause” exploring the roots of our broken human condition and the cause of our hope for salvation.

Unfortunately, this second Sunday of Lent I was too sick to celebrate the Eucharist and preach the second part of the series in my parish. Part of the “broken human condition,” the existence of viruses graded me by the respiratory system and laid me low in bed. Thanks to our visiting presider Father James Chambers, OMI who was able to substitute for me with short notice.

Since I didn’t get to give my message to continue the series, I’m posting it here, for continuity. I should be back in the pulpit next Sunday by God’s mercy. I’m feeling about 85% as I post this on Monday.

Root Cause: Cross My Heart and Hope to Die (Lent Week 2)

Readings for Second Sunday of Lent – Cycle A

“Cross my heart and hope to die!” When I was young, “Cross my heart and hope to die” was a solemn declaration of a promise to another person. Maybe children still say such an oath when they want to indicate how serious they’re taking a promise. There are things in life worth risking ultimate consequences. Of course, no child actually believes they’ll be required to carry out the dying part of the oath. It’s just a promise the child will fulfill an agreed upon obligation.

God makes promises, too. When God makes a promise it’s called a covenant. In the time of Abraham such a solemn covenant agreement was often sealed with a ceremony of sacrificing animals. Animals would be split in two and the parties to the agreement would walk between the halves as a way of saying “If I break this agreement, so should I be split apart and die.” “Cross my heart and hope to die!”

The solemn promise made to Abraham in today’s first reading is a promise of protection from anything that would destroy Abraham. In the early days of humanity’s relationship with God after humanity’s choice in the Garden of Eden that lead to living in a world full of death, an afterlife in heaven wasn’t imagined. A person lived on in his descendants and the “nation” he founded. God, in the first reading is promising a kind of eternal existence to the man all three major religions that believe in one God trace their roots to, the Jews, Christians, and Muslims. It’s a vision of the future, a future without death lurking in every moment of life.

These weeks of Lent we’re examining the “Root Cause” of humanity’s imperfect, dysfunctional existence and seeking to know the way to truly live. We were created to live! To live richly, fully, unencumbered by fear, illness or the limits of time. Ultimately, death was consequence of human rebellion against God’s desire for us, the root cause of our problem as a human creation. God reaffirms his promise, his desire for humanity to flourish, to know life in the story of Abraham. But the covenant to protect and make of Abraham a guy with lots of descendants was not a sufficient enough promise for God. It didn’t go far enough to achieve the vision of God for humanity. It was only a hint, a vision of what God had in mind. God needed a “root cause” of human salvation to be saved from the power of death.

Just as death was the consequence of the root cause of human choice to believe the lie of the evil one to Adam and Eve that humans don’t need God, Death becomes the root cause of our salvation in Jesus, the fulfillment of a promise. 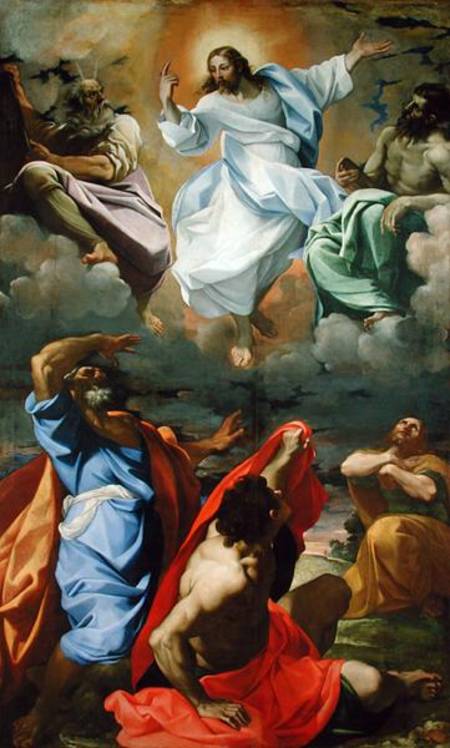 The day Jesus takes Peter, James and John up to some high place far above everyday life, Jesus is making a promise. The “mountain” is a symbol of a world apart, high above the mundane life of the everyday. God speaks from mountains in the Old Testament. Jesus is taking his friends into the realm of the divine, revealing His version of reality. Talking with Prophets on a mountain is the scripture author’s clue to the reader that Jesus is the fulfillment of a promise made to God’s people across the ages. Jesus is helping his disciples understand that he can be trusted to keep his promise to restore creation to it’s fullness of life. The ancestor of Abraham, the “root of Jesse” becomes the cause of a new tree of life (the Cross) to give up the fruit of eternal life.The transfiguration experience is a statement of the solemn promise that God makes humanity – death will lead to life.

Like the apostles we’d like to enjoy the fruit of the tree of life Christ climbs on Calvary without the sacrifice of offering ourselves in daily trials. We’d like to have the banquet of life without the work of preparing the feast in the kitchen of this world. Why must we sacrifice? Why must we suffer and then die? That’s the business about the apostles wanting to put up tents. Haven’t we all had moments in life when everything seems to be going so good we don’t want it to end? We were baptized “into” Christ. That means looking at our sacrifices, our sufferings as ways of sharing in the dying of Christ that produces the fruit of the cross, eternal life. The Transfiguration is a vision, a promise, that everything we have, do or will go through is worth the experience. There is a light guiding us through the realm of death.

In the midst of our suffering, as we make sacrifices for the good of family, in the midst of our grief when a loved one dies, look to the faithful Savior. Recall the vision of what God has promised in the death of Jesus, our root cause of hope in the face human destruction. Hear Jesus say, “Cross my heart and hope to die. For my death is the death of death and way to life for all who walk with me through the world below the heights of eternity.”