Future of Fear or Hope

Sometimes, after the Sunday Eucharist, greeting members of the assembly as they leave the church building, one or two will complement me on the homily. Even more rare is a request for a copy of the homily. It’s flattering when that happens, but it can also make me wonder if my other homilies on other weeks didn’t touch the heart or stir the thoughts of those who listened and I failed to proclaim the Word of God in a way that can be heard by the contemporary parishioner so that they will go out into the world experiencing a conversion of heart, the goal of all preaching. This weekend was one of those where there were comments and a request. For some reason the following stored the hearts of a few folks. Thanks be to God for letting me be the messenger who spoke his word that changes hearts and proclaims Good News! 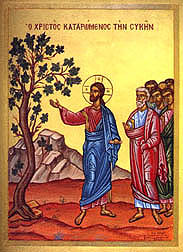 “Learn a lesson from the fig tree.
When its branch becomes tender and sprouts leaves,
you know that summer is near.
In the same way, when you see these things happening,
know that he is near, at the gates.

Homily for the Thirty-third Sunday of Ordinary Time, Cycle B

People have a conflicted relationship with the future. Some people say they don’t want to know what’s going to happen in the future because such knowledge might immobilize them in the present. If they knew when, where and how they were going to die, they might shut down and never leave the house. Such folks relationship with the future are based on fear. Other people are almost fascinated with the future and say they want to know what’s going to happen so some sort of prophetic prediction will enable them to be prepared. But usually such predictions are full of fear or produce anxiety. Think of people who try to interpret the “symbolic” language of a 16th century writer named Nostradamus. His writings are often read for clues to foretell the future, a future that is full of tribulation. T.V. preachers tell of a terrible time to come as they claim to be able to see the future foretold in book of Revelation. Such supposedly enlightened so-called religious characters usually predict a future to full of fear. Pay them no attention! They’re totally misusing the Word of God! Their method is a total mis-reading of the last book of the bible – it tells of current events at the time it was written in such a way as to strengthen Christians under persecution. Revelation is like a pep-talk to Christians fearful of current events to stay strong during persecution. Jesus wins! Romans, those who claim earthly power lose! That’s how it should be read today, not as a fortune teller’s script.

Even the Gospel and first reading of this Sunday’s liturgy seem to talk about fear and anxiety as hallmarks of what’s to come. Wars, natural catastrophes will occur. A time of tribulation will be the sign of Jesus’ future return.

So, is this the time of tribulation? Terrorists blow up and shot innocent people out for a night of fun in Parish restaurants, theaters and outside a soccer stadium. The message seems to be fear for your future for you have offended us! Violence, fear become the method of choice to send a message about the future.

The Gospel is not meant to scare us, but to be Good News! That’s what “Gospel” means in Greek, “Good News!” Remember, every age has had its doomsayers predicting terrible times. Every era of human history has seen wars, has experienced natural disasters that cause human misery. The Good News is evil doesn’t win in the end. Jesus triumphs with love. The cross and resurrection are the sign of love’s victory destroying hatred and death. Good News! Sacrificing yourself like Jesus, in union with Jesus who are members of by our baptism, brings peace.

The evil things that happen to innocent people out for a carefree Friday night killed by terrorists are a sign…A sign that humanity needs the love of Jesus to come and bring his kingdom of harmony, NOW. The bad stuff that happens in any age is a sign that Jesus is the one we await and need to set right the mess we humans have made of our human family. Sin, human hubris, the expression of hate that happens in every age is a message to be taken to heart…Jesus can not doesn’t want this to continue. He is coming, be ready. He is already here, standing on the threshold of a new order of humanity already entering human history through his body the church. Change, or be ready to experienced the consequences.

How do we get ready for the appearance of Jesus, to meet him both not and in the future judgement? Make a choice…

either give into hate rooted in selfish pride, continue to increase the division of humanity into it’s tribes that try to conquer one another and suffer the consequences; be separated from God forever in unimaginable misery (Tradition calls such existence Hell)…

or…live life as Jesus revealed as the way to the fullness of living where dying to self for the sake of others well-being is the opening up of a life that cannot be defeated by death.

Those who follow Jesus have a Future full of HOPE, therefore they are not afraid even of the present troubling events.

If we live in the present seeking to reconcile people who are estranged, if we strive to bring justice (right-ordering of human relationships where no one is stronger or has power over another, or abuses the human dignity of others), living lives of compassion and service to the poor our joyful future with Jesus is pretty much assured. Because Jesus Christ is just. He will know you served Him in the poor, you didn’t deliberately try to destroy life that was no threat to your personhood respecting the human dignity of all, Christ will give the fullness of life. Jesus is merciful, overlooking our selfish poor choices and wiping them out of existence so they do not hinder our ability to pass through the threshold of eternity.

Those who are in Christ fulfilling the mission of the Church the best they can, forgiven of sin don’t worry about the future. God is there already and has prepared a new life for us. In the Creed we say at Mass we profess, “I ‘look forward’ to the resurrection of the dead.” “Look forward” has the connotation of excited expectation in this context, a “I can’t wait, it’ll be wonderful” sense. Concentrate on living in the present as a person who shows compassion and mercy. Then the future won’t be something to fear.